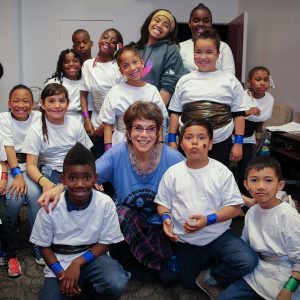 Judith’s career as a business consultant has spanned a variety of fields. For over 10 years before founding Handful Players, she served as President of CoMotion Corporation, which she founded to help companies transform their business through communications. Today, fulfilling a lifelong dream, Judith is helping children thrive through the transforming power of theater. Before starting CoMotion, she was a Senior Vice President with Xceed Inc., an interactive marketing communications firm. During her career she has been an account manager and senior consultant with the international human resource consulting firm, Watson Wyatt Worldwide, a tax accountant with the global accounting and management consulting firm, Deloitte & Touche, and a Director of Finance for Jewish Family and Children Services. A former C.P.A., Judith holds an M.B.A. from Golden Gate University and a B.A. in sociology from Mills College, where she was elected to Phi Beta Kappa. She has been an active member on the Boards of The One Act Theatre, YMCA – Embarcadero Branch, and the San Francisco Chapter of the CPA Society. In 2016, Judith was honored as a Community Connector for providing San Francisco’s Western Addition youth with quality performing arts enrichment opportunities by Mo’MAGIC, a collaborative of youth organizations founded by San Francisco’s Public Defender, Jeff Adachi. In 2015, Judith was awarded the Jefferson Award for Public Service, by CBS San Francisco and the Legacy Award for her sustained support of theater by Theatre Bay Area.

Darien understands first-hand the impact of performing arts on underserved youth having studied and performed in Handful Players’ musical theater programs for two years as a youth. He values the chance now to give back to a group that had a significant impact on his life by helping him gain tools to see the world from more than one perspective. As Program Coordinator, Darien manages the scheduling of program workshops and special event activities and related reporting and general administrative tasks. He serves as the liaison helping teaching artists and partner camp contacts stay connected and in communication. He has a B.S. in Biochemistry from the Rose-Hulman Institute of Technology.